The last week or so the WiFi at the marina has been up then down, up then down, then non-existent.  Those of you who were hoping for an email response from us didn't get any. While this disturbs some of the residents it does free up the day to do more interesting things besides checking for email and paying bills online and researching boat gear.

And at the same time my new (used) cell phone went kaput. So I was out of phone until Keith could come deliver me a new cell phone.  Have to have a quad band, unlocked phone to work in Mexico and the states.

Keith is now here visiting and we're doing all sorts of boat chores but doing fun stuff too. We find that in the middle of the day we can split a big Ballena of Pacifico and it tastes so nice..... 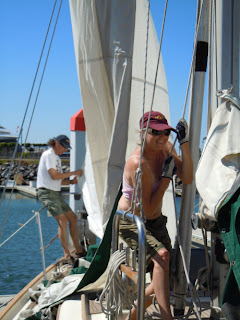 He has been busy ripping the old life raft supports off the deck and patching the holes in the coach roof.  To do so, he had to go below and rip out the ceiling.  Then he went up top and squeezed some 5200 sealant into the holes while I went below to stop the stuff from dripping to the floor below.  I replaced an autopilot cable and then we horsed around with the roller furler for a while.  Once we got that working Connie looked up and noticed the the whole thing was wrapped up backwards with the white sail cloth exposed and the protective Sunbrella fabric tucked away inside. So we had to unfurl, lower the sail, rewind the drum and try it again.  Duh!

Then we took the boat out into 25 knots of wind and huge rollers that almost swept the dinghy off the davits.  What a wild ride!  That didn't last too long as we had the good sense to retreat back into the safety of the harbor. 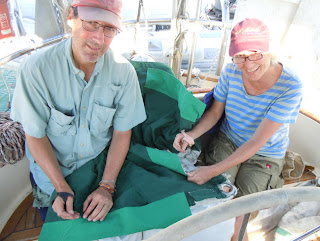 We've been sewing on the headsail for days, repairing the protective cover.  This started as work with the sewing machine then proceeded on to hand (palm) sewing where you take this huge needle and stiff thread and use a heavy leather palm thing to push the needle through the seven layers of sail cloth. Exhausting work no doubt.  Afterwards we had to take a nice long lunch break eating our favorite taco carnitas (pork) and drinking another Ballena of Pacifico. 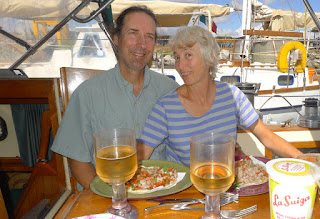 On Friday Keith and I drove off and found a place to galvanize the anchor.  The road was not marked but we found it using a Google map that Luis at the marina store printed out for us.  We met with Roberto at the Galvanizor who told us "no problem, it will be ready in a week, no.. maybe two weeks, depends."  When I asked if he wanted to give us a receipt or put my name on the anchor somehow he said it was not necessary and I can just check back in a week or two and pick it up.  Simple.

As a reward for a week of working hard, and we are working hard (Lisa), we decided to go to the wine country just north of Ensenada. We drove up the Ruta del Vino, route of the vines, to a series of dry valleys chock full of grapes hanging on the vines.  We sampled at two different wineries and had a nice little time spending too much money on wine but making up for it by having lunch of home made tamales a nice lady was selling on the side of the road.  Lunch for three: 60 Pesos.  Wine tasting for three 300 Pesos.  We enjoyed the tamales as much as the vino. 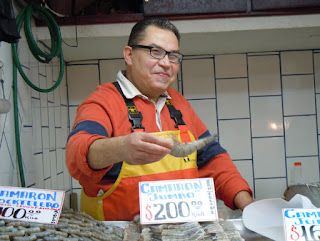 And then there is the trip to the fish market where they have tons and tons of fresh fish and shrimp.  This guy had a way of holding the shrimp by the head and making it look like it was twitching, still alive.

Those big bad shrimp are wild caught locally and are selling for 200 pesos a kilogram. That's about 80 pesos a pound or 7 dollars.  The normal sized ones go for 150 pesos per kilogram or about 5 bucks.  We usually get about a third of a kg and eat shrimp till we pass out.
It's been great having Keith here.  He takes really good pictures and we are relying on him to document our affairs this week.   A storm is coming up the coast, hurricane Paul is off the southern Baja coast and we're expecting some weather from that system this week.  We're a little worried about our friends Baptiste and Chris who left a week ago.  They are probably at an anchorage with rain dumping down as that entire region is getting soaked.  Tomorrow we hope to go kayak the estuary then on Thursday I'll be taking Connie and Keith to San Diego where she takes an early flight and Keith takes a later flight north. Connie will be doing some work in California for a little while and Keith has many customers waiting for his magic touch in their gardens and yards.  I'll be staying on in Ensenada alone.  Just me and all those lonely Ballenas.