Life is not a bowl of cherries down here


I’ve heard a little grumbling from up north (and some praise, thanks Mary) centered on my last comments on what is, to me, the obvious choice of available climates.  Some dissatisfaction has been expressed also on the glowingly positive accounts I normally relate here in this journal.  To satisfy those shivering grumblers from the north country I will focus this post on the difficulties of life here in the tropics.

Yes we are in the tropics.  On the way south from Ensenada between Magdalena Bay and Los Cabos at precisely 23 degrees 26 minutes 16 seconds we passed a line of latitude called the Tropic of Cancer.  At summer solstice June 20 if you were standing on the Tropic of Cancer at twelve o’clock noon you could look straight up and see the sun directly overhead.  If you moved north of that latitude the sun would never, never be overhead.  Likewise if you stood at 23° 26′ 16″ south in the southern latitude and looked upward at the sun on December 21 you would see it directly overhead. This latitude is the Tropic of Capricorn.

For those of you lucky enough to find residence up north you will never see the sun directly overhead, never feel direct rays of vitamin D, and in the winter see only a faint hazy orb in the southern sky, weather permitting.

What makes the tropics the tropics outside of this ability to have enormous amounts of vitamin D raining down directly on the crown of your head?  Bugs.  We’ve got bugs.  Mr. Roach crawled up my leg in the shower yesterday and no-see-ems or jejenes (pronounced Hay-Hay-Nays) attacked me on the dock last night.  Dengue fever is out there is being carried about by voracious mosquitoes  and numerous seabirds roost in the rigging targeting your Vitamin D soaked head with their juicy white droppings.  It’s warm in the tropics and critters, both big and small, proliferate. 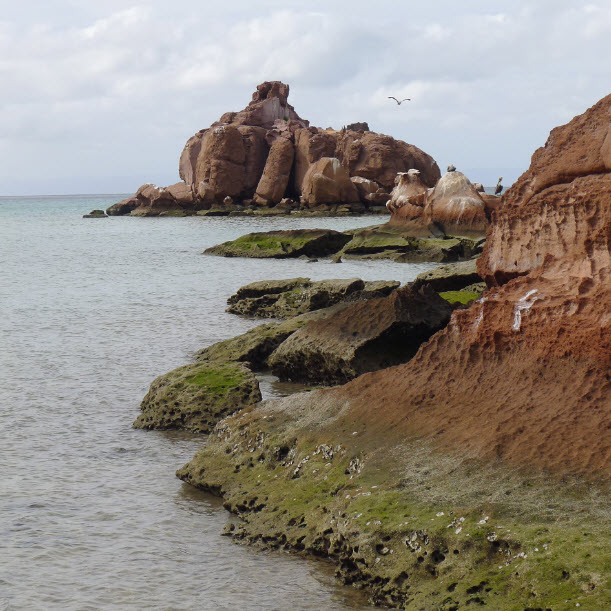 We crossed the tropic of Capricorn on the way down the coast, then passed it again as we beat our way up the East Cape to LaPaz.  In Lapaz, Connie’s son Ezrah joined us for a week and we visited Isla Espiritu Santo for a couple of nights of quiet anchorages.  On the way back into LaPaz we hoisted our large festive gennaker and Ezrah got a chance at the wheel, taking us down the long entrance to the harbor, threading his way between the buoys in the narrow channel.

Our friend Chris Simpson arrived to help us take the boat across the Sea of Cortez to Mazatlan.  Leaving LaPaz, we rounded the corner and passed the tropic of Capricorn for the third time just north of our jumping off point at Los Frailes.

For more on the hardships of life here in the tropics I’ll relate the story of our crossing in the next post..
Posted by Guido Scott at 8:11 PM