As I lay in bed the sunlight shines through the starboard port hole and paints a bright orange oval on the varnished teak of the cabin wall.  The oval is still.  It does not dance like it does at sea. 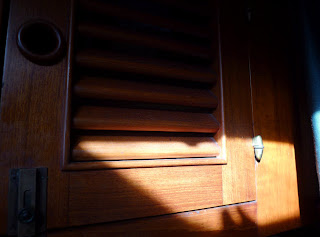 We must be at the dock. When at anchor or while underway the morning light comes in much the same way but the orange oval dances up and down and around with the movement of the boat.  If the boat is rotating about her anchor like she often does in the morning as the land breeze gives way to the sea breeze the orange oval might just dance halfway around the cabin until Traveler is pointed out to sea.

At times there will be a second, less intense, oval just below the first. This is the reflection of the morning sun hitting the water and bouncing back up to the port hole and into the cabin.  These two ovals will start to separate as the sun rises off the land until the weaker one, the one that really shimmers, disappears entirely.  I have plenty of time to see these kinds of things. It has taken me some time to get to the point where I can watch the world around me for these small details.

Let’s consider (Why not? We've got plenty of time) the differences of Traveler at sea versus Traveler at the dock.  At sea the morning oval on the wall dances.  At the dock, the oval steadily advances, as true as a sun dial.  Our habits change when we are away from the dock.  At sea we are miserly with our water and power and each morning and evening I check the amp meter. At the dock, we run the water faucet at will and plug everything we can find into the wall outlets, using the microwave or toaster oven on a whim. At first I’ll check the amp meter each morning until it finally sinks into my head that it will always read 13.3 while we are plugged into shore power. At sea I cram myself into the head each morning and carefully do my business.  At the dock, we enjoy and appreciate all the porcelain facilities on shore, even taking hot showers on occasion.

Often at sea, we find ourselves being woken by Traveler as she makes her wild gyrations having turned her side to the incoming swell.  But at the dock everything is still.

At sea the stars are brilliant.  At the dock the stars are still there but fainter, and they compete on Friday nights with the local fireworks display.   On the weekends we hear the sounds of the tuba and other  horns wafting over the water from the resort around the turn.  At sea, we hear only the wind in the rigging and the boat banging around.

In an active anchorage, meaning one with waves and swell, I spend some late night minutes searching around the boat with a small flashlight trying to snuff out a clinking, clattering item bashing around inside some cabinet.  At the dock all is still and you can leave the wine bottle sitting out on the counter and the ink pen on the table.  But… you will hear the occasional burp of the bilge pump or the quiet click and hum of the refrigerator.

So we have two different worlds we live in, one at sea and one at the dock.  I prefer, of course, the one at sea but after being at sea for a while those first few days at the dock seem to bring such luxury.

We’ve been here at the dock for about 12 days and the place is becoming quite familiar.  Each morning, across the channel the big yellow diesel crane truck comes out of its lair under the bridge and rumbles across the sandy flats to the dredge site where it sits all day, unused, until late afternoon when it rumbles its way back across the flats homeward.  Likewise, each morning one of the marina workers walks down to the dock and drives the big yellow panga around to the fuel dock where it stays all day.  Later that afternoon, the fuel dock closes and the same man drives the panga back here to the dock and ties it up using the same line on the same cleat just as he did the day before.  As I see the panga go by I look across the flats to the highway were the two rolling billboard trucks slowly promenade down the road towards the hotel zone, only to turn around and slowly promenade back advertising the new Triki Trakes cookies with chocolate crème filling.  As this is near sundown, there will be one or two fishermen standing in knee deep water tossing their nets into the murky water.

Each day the mud flats across the channel march out past the big stick that someone stuck in the muck to warn boaters away.  The ridge of mud will extend just a few feet beyond the stick before the tide turns and the water begins to cover the mud flat until five hours later it is all water, water with that big stick poking up.  If it is near sundown, a crane (bird, not machine) will stand next to the stick as the water starts to lap up its legs. Same crane, same stick.

Does observing all this mean we’ve been here to long?  Probably, but not necessarily.  Connie likes to say that there is a reason for everything. Maybe the reason we are here, waiting two weeks to get hauled out, is for me to take the time to chill a little.  So I’m on the watch for other predictable comings and goings and am delighted that at this time, in this present situation, I have the leisure to listen and observe.

Note:  Traveler is now on the hard. We had our survey today.  Tomorrow we get the estimates.  Hold on to your hats. This one is gonna be a whopper!
Posted by Guido Scott at 4:51 PM