We've jumped ship. Couldn't take it any longer.  Life on the hard finally got to us as temperatures soared and we tired of carrying buckets up and down the ladder. See the photo above and imagine how it is when the temperatures are in the 90s and the air is filled with fiberglass dust and paint fumes.  We talked to Bob and learned that it would be another four weeks before Traveler would be ready to go back into the water.  He advised us to take a vacation from our vacation.  So we hit the road.  We headed north to the country of our origin.


﻿﻿ The first few days we fried, as the little Honda car took us through the Sonoran desert without air conditioning. We stayed at the Departmentos Adelie in San Carlos the first night, then arrived in Phoenix to visit Connie's sister, Diane and her husband, Tom the second night, staying there for about a week. We enjoyed the swimming and attending a swim meet... and we got the air conditioning in the car fixed.  The best part was hanging out with Ava and Brevin. From Phoenix we went to Albuquerque and stayed with Connie's friend Barb who made us feel right at home. Our Traveling methodology is focused on routing ourselves so we always
find a free place to stay and find old friends to catch up with.  As we travel around the USA this summer you can bet we'll find you and crash in your spare room if you are anywhere near our planned route.  After all, we are on a budget!

As we headed east we ran out of daylight and crashed at a free campsite near Elk City Oklahoma.  Then the next day rolled across Oklahoma to join our friends Richard and Sheila at a wonderful little cabin next to a river.  That was a very relaxing three days and we caught up on 23 years of news. It sure is nice to catch up with old friends who you have not seen in decades. 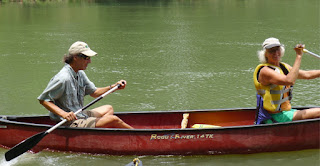 Now we are in Hendersonville, Tennessee visiting with brother Bernie and his wife Amy, and mother Voltz of course.  Next we head to Galena Illinois to see Connie's family there.


I'll be flying back to Mazatlan in two weeks where I'll find Traveler ready (or not) to go back into the water.  Connie will park herself in Seattle and Olympia awaiting my return then we'll spend the rest of the summer in the Northwest visiting friends, crashing on couches, and making ourselves a nuisance.  We figure to worm our way into a home, drink up all the beer and wine, raid the refrigerator, and once our welcome is worn out, move on to the next friend's house.  We'll also do some sailboat cruising this summer in Puget Sound as I've reserved a boat at the WYC.

See you soon.  Get that beer stocked up please.

And now an aside about how somebody stole my America:

As we made our way east from Albuquerque the flat scenery didn't change much but what did change was the roadside scenery.  Our eyes were bombarded with religious references on the side of the road.  We observed this all the way through Texsas, Oklahoma, and Arkansas.  Some were huge billboards telling of Christ's coming, "Warning, Jesus is coming.  R U Ready?"  Warning? Sounds like something I want to run away from really fast, and we did at 75 miles per hour. 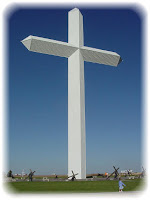 In Groom Texas we saw a huge 19 story high cross on I-40.  People flocked to the scene admiring the statues at its base, some with anti-abortion themes.  And the churches, they were everywhere and they were big.  We'd see a hill off to the side of the highway and there would be three crosses on top. Then down the road a sign on the side of a trailer on someone's roadside property referenced a bible passage.  Off the main road we'd see little signs in people's yards with bits of scripture on it and everywhere, there were billboards advertising the various churches in town.  We got the feeling that in this part of the country you had to be a member and you had to let everyone know you were a member. 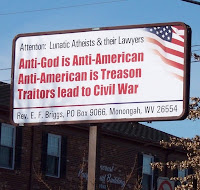 We turned on the radio, looking for NPR.  No such luck.  But we did find talk radio and Mike Huckabee, and right wing religious propaganda spouted from the car speakers.  I tried to follow the logic but it just did not make sense to me.  Government should stay out of our business. But on the other hand, government should pass lows telling women what they can or cannot do with their bodies and telling same sex couples that they are second class citizens.  We tried to listen to the radio, just to try to understand where these folks were coming from, but the vitriolic words were mean spirited and conflicted so much from what I thought religious doctrine espoused that we had to turn it off and sit in moody silence as Connie accelerated the car.

We could  not wait to get out of Texas, and then across Oklahoma.  The last time I traveled this county by car I remember the wonderful scenery and the little mom and pop diners in the small towns.  But that was 22 years ago and things are different now.  Now the mom and pop diners are few and far between, replaced by chain restaurants.  And now the roadsides are full of religious propaganda and statements of fear.

We thought it was funny to see competing billboards coming into Oklahoma City.  On the north side of the highway was a billboard talking about how we need to stop sex trafficking.  On the south side was a billboard with scantily clad women inviting us into an establishment where we'd satisfy our sexual needs.  And there would be a sign touting Jesus's love next to an advertisement for an indoor shooting range. Wanna take a class on concealed handgun ownership?  There is a a special price for women.

Guns, God, abortion laws, proud displays of the American flag, big pickup trucks, and ball caps.  Now the last three I can handle, but the first three have no place in our public spaces.  Who stole my America?
Posted by Guido Scott at 7:30 AM