Years ago, just after the millennium change, I bought a Tohatsu long shaft six horsepower outboard motor.  I bought it new, it was an attractive machine, and it ran beautifully.  At the time, I was teaching sailing at the Washington Yacht Club.  The students were mostly undergraduates enrolled at the University of Washington but there was the occasional older UW staff member or medical school student thrown into the mix.   First I taught the novice class for keelboats, sailing around Lake Union, a stone’s throw from the university.  Later, I moved on to teach the skipper level class, taking the boats out in the more boisterous Puget Sound.  One of the problems we had was the sorry condition of the boats and motors.  This was expected because the membership dues were very low, a necessary situation so that that the students could afford the classes.  The boats were sometimes donated or occasionally purchased at bargain prices and they made perfect platforms for young sailors to practice carpentry, fiberglass repair, and mechanical skills after they destroyed things by misuse or ramming the boat into the dock, which they did quite often.  While simple, these boats were fairly stout.

The engines were old 9.9 Hondas and they had a reputation of failing at just the wrong moment such as when you were exiting the Hiram Chittenden locks in Ballard or approaching the fuel dock at Shilshole Marina.  I used to argue with the keelboat fleet captains till I was blue in the face about the state of the engines, me proposing plans on how to buy new or newer Hondas, them giving me that salty dog glare of an insulted mariner.  After a particularly difficult situation dealing with a bum motor I finally bought myself the Tohatsu Six.  I would then load it aboard the boat whenever we went out on Puget Sound, taking it along as insurance.  If I took it along, I didn’t need it.  If I didn’t, we’d have an engine failure.  We had some great adventures out on Puget Sound in the winter with heavy seas and high winds tossing the little Catalina 27s or the Ranger 26, scaring the students and soaking everyone to the bone.
Later, when we bought our first sailboat, a Newport 27, I installed a bracket on the transom to fit the Tohatsu and when our diesel engine finally died we used the little outboard to push us across Admiralty Inlet.
Fast forward to 2011 and I shipped that same Tohatsu six to San Diego after purchasing Traveler, this after finding out that the outboard on her stern pushpit rail was nothing but a solid chunk of rust.

We had a big Caribe tender for Traveler about ten feet long.  It was a RIB (rigid inflatable boat) meaning it had a fiberglass hull with inflatable air chambers.  Those chambers leaked air so we were constantly pumping the thing back up.  With the fiberglass double hull the thing was pretty heavy and the water that seeped in between the floor and hull made it even heavier.  It was a difficult little boat to haul on deck using the jib halyard winch so last year we finally replaced the tender with a lightweight aluminum RIB.

When I mounted the Tohatsu on the new dinghy the motor’s long shaft went way down in the water and when you tried to plane, water splashed in over the low transom.  This led me to say out loud, “I sure wish we had a short shaft motor!”  Be careful what you wish for, my friend.

We were at the Fonatur marina in Guaymas, our second time this season.  We’d had the boat on the hard all summer and fall, then launched in December only to bring her back on the hard for a prop shaft straightening.  Now we had to haul out again to do it all over.  Third time’s the charm!

Jill and Doug on Compañera volunteered to tow Traveler south across the bay so we could anchor in our old spot in preparation of hauling out the next morning.  I used the dinghy to push Traveler out of the Fonatur slip while Connie took the helm. Our buddy Mike from Pura Vida came along as a consultant and line handler. We got her lined up properly for the tow and I passed the hawser from Compañera through the tow bridle and we were on our way.  Once at the south end of the bay just off the ways (haul out facility) the anchor was plopped into the mud and set.  Traveler was left there on her own while we finished up some things in town then took the dinghy back to the boat for the night.  As it was getting dark, we hauled the dinghy up alongside the big boat, dangling it about four feet above the water, cranking it up on the jib halyard.  Nice, easy, simple.  Connie asked if we should lock up the dinghy motor and, being tired (and stupid) I said no. 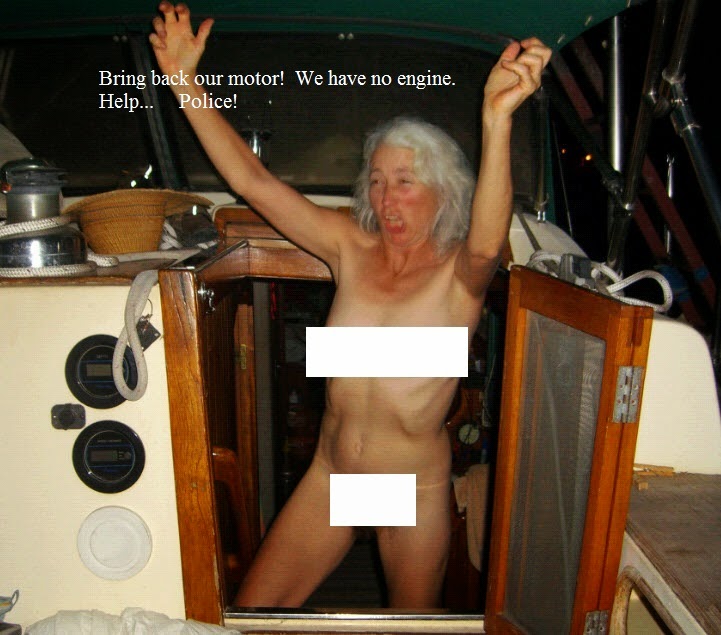 A windy night at anchor till pre-dawn kept us from sleeping well.  Connie heard a noise at about 06:00, some splashing sounds, regularly spaced.  She went up top just in time to see a person in a small boat rowing away towards land.  Spinning around, she could see the dinghy hanging there, just dinghy, no motor.  We’d been burgled!  Tohatsu no more.

I awoke to the sound of Connie yelling, “Bring back our motor.  We have no engine. Help. Police!”   Her Spanish had deserted her.  Connie kept screaming bloody murder as I stumbled out of bed and onto the deck.  There we stood, buck naked, staring at the slight wake of a small boat on the smooth water.  I dove down below and fumbled the flare gun out of its case, loaded a cartridge and came back on deck firing four flares in the direction of the little row boat as fast as I could load.  I followed those up with a big rocket that arced up into the air and exploded high above us.  The little boat with the thief had disappeared into the night.

On land, behind us at the haul out the guard was shining his light at us.  On land to the south two pangas started towards us from the beach.  Connie suggested we put on some clothes.

The panga fishermen came straight out to see what all the commotion was about.  They grasped the situation pretty quickly and one of the pangas took off after the scallywag.  As the light filled the sky, I had one of the fishermen call the police on my cell.  Then as I was boarding their panga for a ride to land the other panga came back with this little beat up rowing dinghy in tow.  They found it run up on the beach, footprints leading up to the road.  We tied the little rowing dinghy to our boat and I went in to shore to talk to the police and then get a ride from them to the yard where I spent the next two hours trying to find someone with an outboard motor we could borrow.

Connie rowed our dinghy to shore and we mounted Chris's motor.  Omar arrived and he jumped in with us as we sputtered out to the boat.  Soon another larger dinghy arrived and gave us a nice push into the ways.  We made it in by 10:00, the cut off time we were allowed because another boater had reserved the lift for noon.   Soon the lift arrived and when lowering the slings they forgot to pull down on one of them and a cable drum got hopelessly tangled.

The crew spent two hours straightening it all out, everyone getting extremely greasy and slightly pissed off.  The yard owner then preempted our haul out to unload a truck off of a flatbed and by that time it was 14:00 and everyone went off to a late lunch. At this point Connie started drinking Havana Club while we sat  in the ways, our keel sinking into the mud at low tide.

By 16:00 the lift was back and the crew was able to worm the slings onto poor muddy Traveler.  Thank dog the lift points are above the keel or one of us would have had to do some mud diving.  Once she was out of the water I held my fingers crossed that the muddy slings would not slip off before they could hustle some ropes on to tie them fore and aft.  We found ourselves safely back in the yard before the sun set behind the hills.  Twelve hours had transpired since we awoke so abruptly.  Now we could sigh, tip a glass, and try to put everything back into perspective.
The yard manager said we’d for sure catch this thief because we had their little rowing dinghy.  The cops said that someone would surely see us tomorrow to start the investigation.  A week later, nothing has happened.  We don’t really think anything will.   Since then I bought a used Suzuki 6 hp outboard from a fellow boater.  We had to do a little work on it to get reverse working but now it runs great.  I keep it on the back rail, solidly locked.

We ran into an old salt in the yard who said that’s the sixth outboard he’s heard about being stolen in the bay the last few years.  Evidently this is a common thing in Guaymas and San Carlos and many other places in Pacific Mexico.  Come to think of it, it is pretty common in Seattle and in other parts of the States and Canada . So be warned, take the motor off the dink and lock it to the rail or lay it down in the cockpit where it can’t be seen.  A friend of ours uses a string and a bell so that if someone grabs their motor she’ll hear it.  Now that’s a great idea, tie a string to my big toe and keep the flare guns handy.  Then I’ll be able to blaze away and light someone on fire as he jumps for it.

All this gear is now back in place. Tomorrow Omar aligns the engine again with reworked mounts and a newly balanced shaft and prop.  We sure hope for the best come mid-week when we’ll splash again and try the magic third time.

On the passage making front, we’re getting ready for a Hawaii jump in April.  I’ve ordered a bug-out bag, figured out what emergency supplies we need outside of what’s already in the Viking RescYou offshore life raft, and started listing the items we’ll need.  The raft comes with four days of water for three people but we are adding an AquaMate solar still so we’ll have water on day five, six, seven… fifty.  We’ll bring three straws for when we run out of food.  Short straw is the entrée.
“I do wish I could chat longer, but I’m having an old friend for dinner.”  Silence of the Lambs  1991
Posted by Guido Scott at 7:44 PM