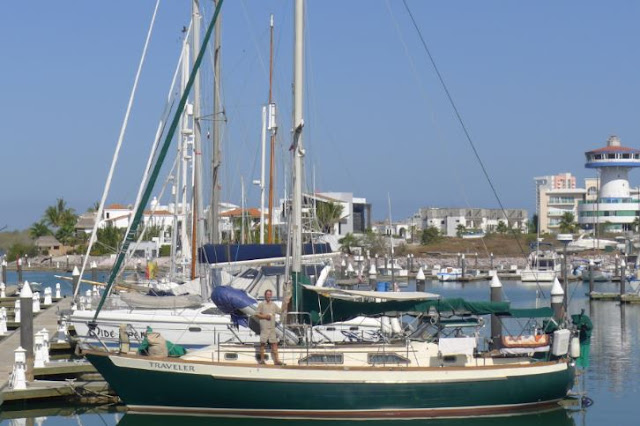 Stuck:  Not with any kind of gear problems, or mental issues.  The port captain has closed the entry to navigation because of big swells coming in.  If you google Marina Mazatlan you can see the dog leg entrance to the lagoon here.  They dredge the channel on a regular basis to keep the depth.  However in periods of big swell there can be breaking waves at the entrance.  Hence the red flag is flying. The port is closed.  But we came in anyway.

Saturday as we sailed by old Mazatlan we could see and feel large period swells coming into the beach.  Wow! That's a big one.  Yahoo...

Nearing the breakwater I tried hailing Fonatur marina.  No answer.  Marina Maz, no answer.  Fuel dock, no answer.  I then got out the cell phone and called Marina El Cid which is right there at the entrance.  I got a gal on the phone and asked her if it was safe to come in.  She said, "Wait a minute"........(asked someone) then said, " Come on in.  The dredge is not in the way."  So I took that for meaning that the port was open.

We approached and occasionally it appeared that waves were breaking but maybe it was a side eddy or something so I kept on coming in.  I tried to space my entry in a lull then went to full power on the back of a swell.  I then saw the entire entrance break!  I came in just after it with sphincter tight.  She roared through the gap, settled into a trough and the boat went bump.  Just a little bump.  Connie and I looked at each other mouthing "oh shit".  And we were in.  Safe.  Then passing the marina fuel dock I could see where the port captain had his red flag flying.

We chose a slip and had a nice evening.  The dock manager said we might be able to leave Sunday at 11:00.  At 11:00 the red flag was still flying and the dock manager said we could not leave.  We could be fined.  That's OK.  I don't want my boat flung into the rocks by breaking seas.  So we were here another day.

It is a glorious Monday morning and the flag is now Yellow!  What a nice color.  We leave here in 20 minutes headed for San Jose del Cabo to pick up Scott Tobiason and to do some last minute provisioning and to check out of the country.   Hawaii bound, let's hope.