Lahaina Town on Maui, that was fun, enjoying the local yacht club and the craziness of the fourth of July. The town was packed to the gills with sunburned gringos, "Haoles" as the Hawaiians call us. Out on the water, Erik and Meagan on S/V Resolute joined us for dinner for our last night on the club buoy.  They had come over from Mexico just like us but unlike us they were working their way through the Hawaiian Islands from north to south before jumping off for the Pacific Northwest. It's nice to meet fellow cruisers once in a while - "normal" land-based people don't seem to grok what it is we are doing.

We got our little weather window so we let go of the mooring ball and headed north towards the island of Moloka'i.    As soon as we got out of the wind shadow of Maui the trades hit us with wind and waves.  Once again, I got soaked standing at the wheel as the big buffalos came roaring down on us.  We put our trust in Traveler and just held on for the few hours it took to cross the Pailolo Channel.  Half way down the southern side of Molokai we found Kaunakakai Harbor, a long pier running out through a rare break in the reef that covers the entire south shore of the island.


Just outside the harbor we turned Traveler into the wind, rolled up the scrap of headsail, and fought the double reefed main down to the boom.  We found the turning buoy that led us through the reef and dropped the hook in 12 feet of water only to come to a rest 40 feet from the reef.  On the second try we got a little more breathing room between that sharp coral and our rudder, about 100 yards this time.  And so we came to a rest, exhausted after a rough passage.  Still the wind was blowing a steady 15 with gusts in the 20s.  Inside the harbor, we were fully exposed to the wind but surrounded by a huge reef that cuts the wind waves down to almost nothing. 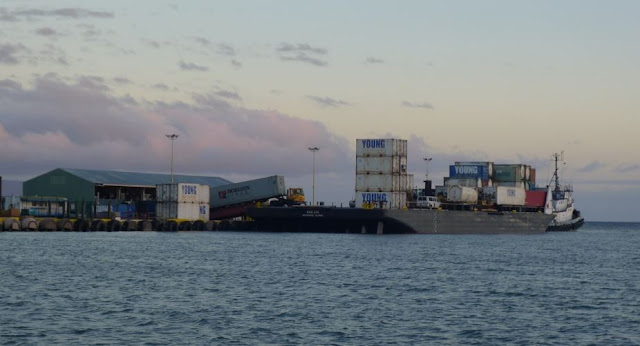 Connie napped while I sat anchor watch, ready at any time to start the engine to motor her into the wind if the anchor chose to break out of the mud. A gust would hit and take Traveler's bow off to one side.  The anchor chain would come tight and we'd swing back into the wind. I watched a tug bring in a large barge and wrestle it to the pier against the wind. Later, Connie spelled me on anchor watch while I lay down.  Finally by sunset the wind dropped to a steady 10 knots and we could both relax.

The harbor master was not around the next morning so we walked around the pier looking at possible places to tie to the dock.  The slips were nothing but pilings to tie the bow and a concrete pier for the stern. On the windward side, boats moored stern to the wall with mooring buoys to hold the bow off. There was no space over there for us.  The pilings on the leeward side appeared to be about 12 feet apart.  Traveler is 12.5 feet wide so that was not going to work for us. Next to the big loading pier used by the barges there was a space big enough for us to squeeze in behind the one large sailboat slip so we opted to claim it.  Tied loosely so the tide could come in and out without stressing our lines we felt lucky to have our lines on something solid when the afternoon winds piped up again.  Later that day the Moloka'i Princess came in on its normal run from Lahaina and took the pier behind us. 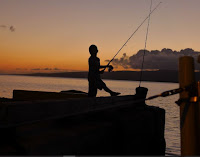 Getting cabin fever, we found the local pub and spent an evening enjoying grub, beer, and live music by the Mobettah Band.  The next day we walked through town looking for a bus to take us on a ride around the island.  No bus on Saturday.. or Sunday.  We did met a lady with a ukulele who showed us around town a little. We walked to her house and she found a neighbor who agreed to rent us her old Saturn so we could take a drive around the island.  Now these people didn't know us but they gave us the keys without a concern. "What are you gonna do, steal it?  It's an island!"  We hopped in and drove to the Kalaupapa lookout on the north shore overlooking Kahi'u point where the leprosy colony is and was. 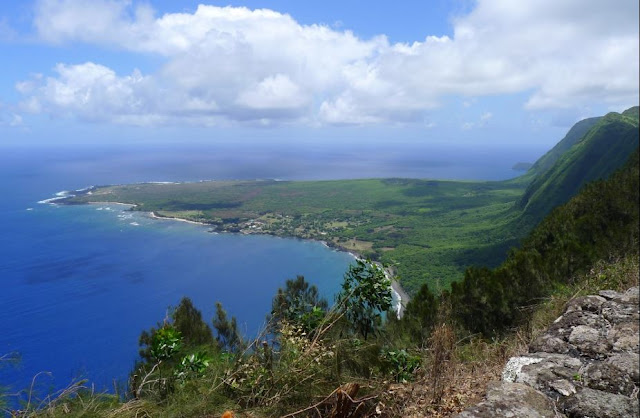 We hiked over and saw Phallus Rock nearby. 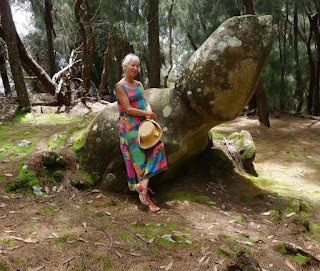 On the west coast we found a wind swept beach and a huge almost-failed development. 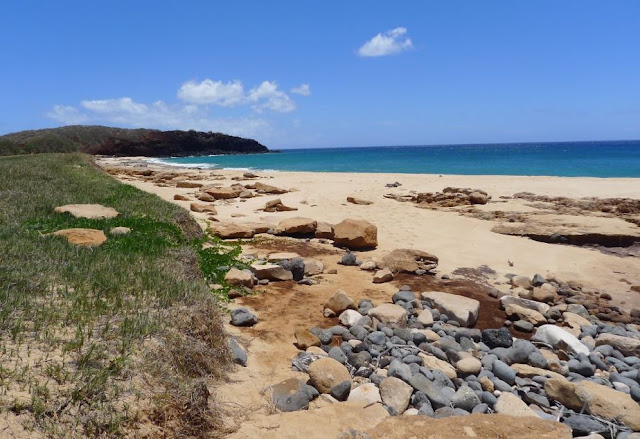 Driving the road out to the east coast we slowed to a crawl as the road narrowed down to a single lane and the rain came upon us. 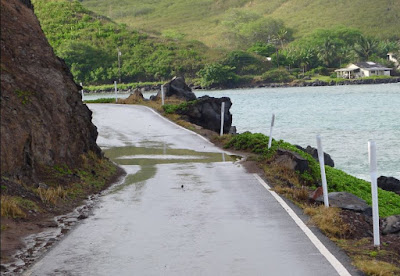 Moving from the dry south side around to the wet east side the foliage changed rapidly from desert to rain forest.  We stood on  the cliff looking south and east at Pailolo Channel.  She was windswept and white capped all the way to Maui, just like when we crossed a few days earlier.  We dropped off the car, leaving the keys inside when we couldn't find the owner at home.

During our time on Molokai we've been listening to the NOAA weather radio and on occasion, walking to town to find internet to check weather.  The high wind warnings and small craft advisories are over for a few days so it's now time to cross the Kaiwi Channel to Oahu.  We'll leave early, early, tomorrow morning to make the 48 mile journey.  We are also keeping our eye on the tropical storms heading this way from Mexico. Hurricane Blas has stalled out now and soon will be just a light puff of wind.  Celia is right behind Blas and is still packing a punch. I suspect we'll be talking more about Celia in the future.  But for now, it's off to Kaunakakai town to find some internet to post this blog and catch up on email.  Follow our progress at http://farkwar.com/boats/traveler.map