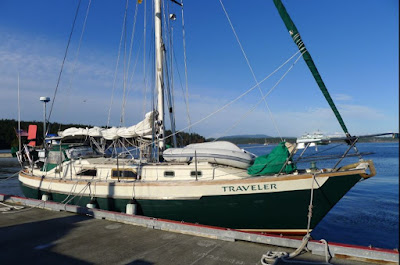 How nice it is to have our boat (which is our house) finally in Olympia.  We are on G dock at the Swantown Marina.  After visiting (by car) friends in California for six weeks, we made it back to the Pacific Northwest in time for the election and the resulting emotional hangover.  Thanking the good folks at the Kingston Marina for taking care of Traveler, we fueled up and headed south into grey skies  When ebb turned to flood at the south end of Vashon Island, we picked up speed and launched ourselves into the Tacoma Narrows where we hit 10 knots over ground!

My Washington Yacht Club reciprocal got us free dock space at the little Oro Bay marina where we plugged in and turned on the heaters.  The next day we got in some sailing on the way into Budd Inlet.  Then we negotiated unfamiliar waters, following the dredged channel into Swantown where they measured our 42 foot vessel and determined that end-to-end she is actually 44 feet.

We'll be here in Olympia for a year or so while Connie gets back into her music career and I'll have plenty of time to do deferred maintenance on the boat. On our last two ocean crossings, Traveler has developed some small leaks, and we've got UV damage mostly in the form of teak trim that needs rebedding and varnishing.  Our list of projects include three new purchases which we are excited about -- a new center hatch, a marine toilet, and a nice heater.  I'm guessing that we'll have a good time at the boat show in January, hunting down some killer deals. 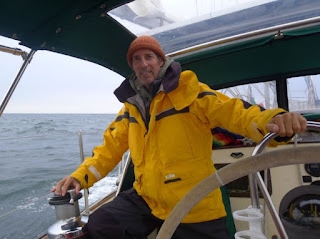 With Traveler plugged in at the dock we have a cozy little home, right downtown.  We are also doing some house sitting in the local area so I can do small repairs  inside the boat.  If you are taking a winter vacation and need someone to watch your house, get in touch with us.  Meanwhile, Connie is taking me around to various venues in Olympia where we are hearing good music, meeting up with old friends, and generally having a nice break from cruising.
Posted by Guido Scott at 5:24 PM