Clear skies brought plummeting temperatures and the full moon brought extreme tides to the Swantown Marina.  At a negative 3.39 foot tide, the ramp was slippery with snow and steep.  From above, the boats in the marina looked like they were sitting down in a muddy hole full of ice. We had two feet under the keel and the electric heater couldn't keep the boat warmer than 58 degrees.  Time for some action!

I got online.. tried to limit my time cursing at the national news... and started researching the parts I'd need to install a Dickinson solid fuel marine heater.  With our budget, we could get a propane heater, a diesel heater, or a solid fuel (wood) stove from Dickinson Marine. Checking prices on forced air or hydronic heating systems freaked me out so I ditched that idea right away.

A stand-alone propane heater has a low BTU output and I've heard that propane makes the boat damp so that didn't appeal to us.  The diesel heater puts out a lot of heat but it costs a lot more than the solid fuel unit, especially when you factor in the fuel pick up, diesel lines, and installation of a fuel pump and day tank.  The budget alternative is the solid fuel stove, and still, it's not cheap.

I read installation documents, watched YouTube videos, and researched before coming up with a parts list.  Then I created a spreadsheet listing prices from five vendors:  Fisheries Supply, Go2Marine, Defender, West Marine, and Sure Marine Service. It became apparent that the two contenders were going to be Fisheries and SMS, both in Seattle. My account at Fisheries gives me a discount and I can get free shipping on big orders.  SMS has good prices, always.

Here is the breakdown:

When you add to this, the cost of  a Milwaukee 5 inch hole Dozer Saw and a 3/8 inch Ergo Saw Arbor ($57.00 total from Home Cheapo) to cut a big hole in the deck I'm still getting the heater installed for less than $1000.00.... one boat dollar.  That's the NEW boat dollar.  I used to call 100 bucks a boat dollar but that's in the past. We are in the brave new future now my sweet hearts.

Connie woke me up this morning (25 degrees outside) at 8:30 with a cup of tea and I spent a nice 20 minutes sitting up in bed, stepping through the process in my mind to get that stove installed.

After a bowl of cereal and a hike up to the public facilities (29 degrees outside)  I was ready to go.  First I measured how far off the wall the stove pipe would be and centering it on the wall just in front of the mast, I made a dot on the ceiling with a magic marker.  Then I measured forward from the mast so I could go up top and see where the stack would pop out.  On deck (31 degrees outside) I measured forward from the mast and noticed that the location would place the front of the hole just inside of some teak deck screws. So I went back down below and moved the location aft a titch.

I recommend measuring multiple times and going on deck often so you don't screw up and cut a hole in the wrong place.  As it is, I still messed it up.... but just a bit.

Getting out the power drill, I found a sharp bit and drilled a hole in the ceiling.  On deck (33 degrees outside) I located the hole and inserted the hole saw.  Then I had a flash... a thought... and then went down below and sure enough I forgot to include the half inch stand off for the backing plate.  I drilled a second hole a half inch to the right of the first. 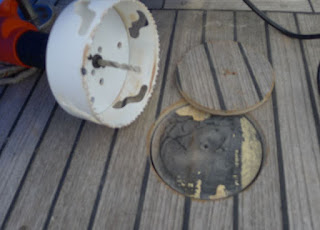 Back on deck I inserted the hole saw and started cutting into the teak deck. The saw bucked and caught and carried on like an angry jackass so I put it in reverse and started the hole, drilling counter clockwise.  That worked better and soon I had penetrated the teak deck.  I pulled out the five inch round teak plug to use later as a big coaster for my growler.  Now the fiberglass was visible.  I'd drill for a minute, then vacuum up the mess, then drill again until finally I got through the fiberglass. By this time the temperature was up to 37 degrees... balmy.  I took off my gloves. 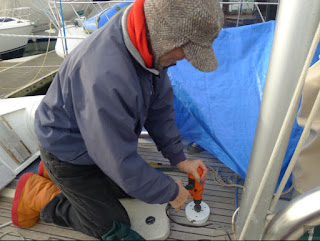 Prying out the plug I admired the solidness of the deck.  There is a thick layer of fiberglass, then some marine plywood, then more fiberglass.  These old Passports, they made them stout.  Down below, I'd left the quarter inch ceiling board in so that it would catch any sawdust and glass debris.  Now I began to grind through that layer with the hole saw and soon I had my finished hole. What's this?  Two bare wires?  Heck, I'd sawed through the DC connection to a ceiling fan.  What a dufus!

Note to self: next time, peek under the ceiling board and check for wires.

Hot air from the cabin came pouring out of the hole and it became warmer on deck.  I removed my hat.It must be 40 degrees now.  A heat wave.  After covering the hole with a Styrofoam box I went below and mixed up some resin and hardener to coat the core.  When drilling through a layered deck you should seal the sides of the cut so that IF (let's just say "when") it leaks, the water won't get into the core and rot the wood. 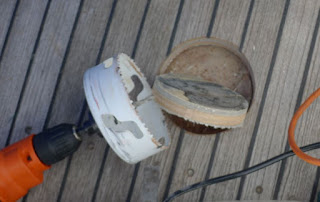 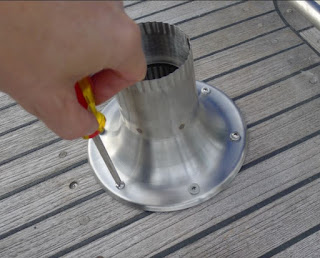 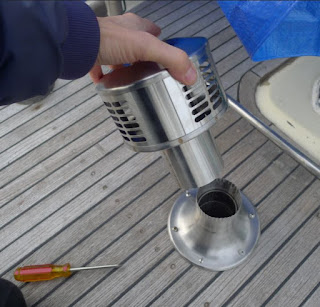 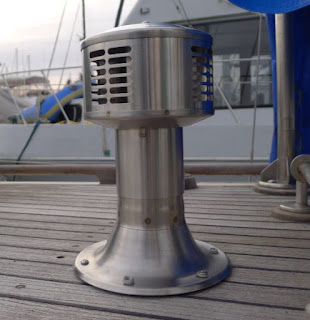 Down below, I put the ceiling panel back up and screwed the collar fitting over the hole. 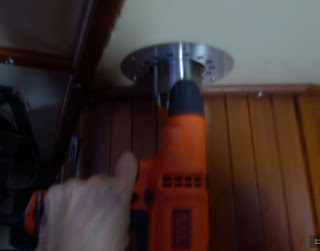 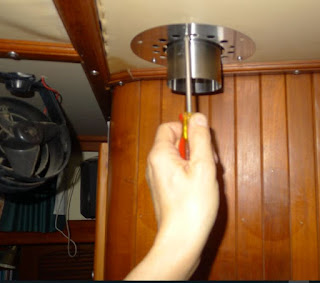 Now I'm good from above deck to below deck.  I used three stainless steel panels to protect the wall from heat, screwing them directly to the teak wall.  I'd called the guy at Dickinson to ask if I needed to put some kind of fiber board or insulation behind the stainless steel shields but he said that was not necessary.  Bonus! 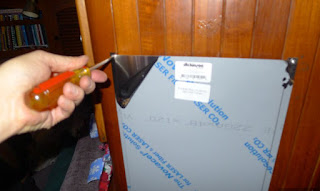 Once I had the shields on, Connie helped me assemble the stove pipe, the damper, and the stove all together. 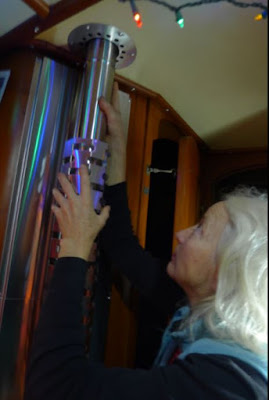 Connie held the unit in place while I marked where to drill the stove mounts.  Then I removed the one lower heat shield panel and drilled four mounting holes, breaking three drill bits in the process.  Drilling stainless steel with cheap drill bits is fun. 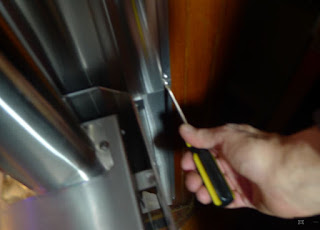 We peeled the protective plastic off the parts, bolted the stove to the heat shield, then screwed it to the wall.  Ta Da!  Done.

Thanks for staying with us for this technical diversion.  Tomorrow we go to a protest march at the state capitol.  You know why. 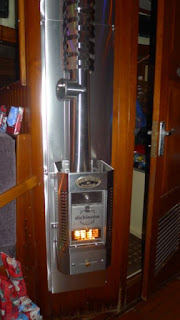