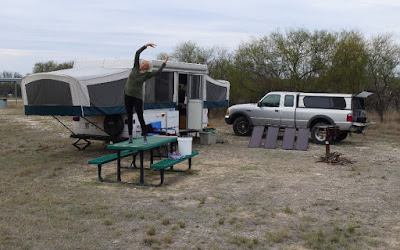 Our story left off with us headed toward Lake Amistad near Del Rio Texas We chose one of the northern campsites there and spent two nice days dry camping and having fires at night.  I drove to town and found internet at McDonalds so we could make an Airbnb reservation in El Paso, our next destination to the west.  As we head toward higher altitudes and gorgeous mountains we'll find freezing cold temperatures so a warm room was a good plan. We were driving down Highway 90 the next morning when the tire blew.   Boom! Flap, Flap, Flap.  Connie pulled the rig to the side of the road and we had a wonderful hour playing with jacks and tire irons. 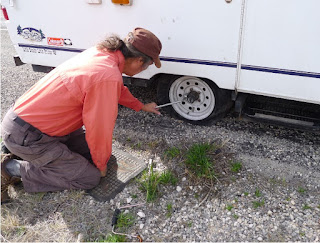 The end of the day found us 400 miles westward in El Paso where Bill, at Marten Tire, fixed us up with a new trailer tire.  Our Airbnb was a private room and bath in a small apartment up in the hills.  The young couple, trying to make ends meet, were actively renting out their master bedroom.  We self-checked in, showered, watched a Netflix movie, slept, and the next morning, cooked ourselves breakfast in their kitchen, which they so graciously offered per a note on the guest info board, never once setting eyes on our super hosts. She works nights at Walmart, he works construction in the day.  Our paths never crossed.  We left a tip to compensate for the unexpected, free breakfast.  Thank you, nice people!

A long day’s drive took us across New Mexico and into Arizona, landing just south of Tubac in the village of Tumacacori where our friend Leo was staying.  We spent three nights there, got in some good hikes, bird watching and enjoyed one evening out listening to live music, and of course, Connie sang a few tunes.  Leo always cooks up a storm in the kitchen so we always eat well when visiting.

Next up was two nights in Phoenix with Connie’s sister, Diane, and her family. Brevin, Connie’s grandnephew, had a swim meet so she spent Sunday pool side.  I caught up on some business at their home with endless internet.

Another long drive took us into California where we were lucky to find the last available campsite (#13!) at the Belle campground in Joshua Tree National Park.  Lucky 13 is right next to luckier 12.  Lucky 13 is always the last to fill because it has a ten degree tilt to the south and its right up next to #12’s parking space.  A strong north wind blew all night and kept us awake as we kept sliding down our tilted bed. 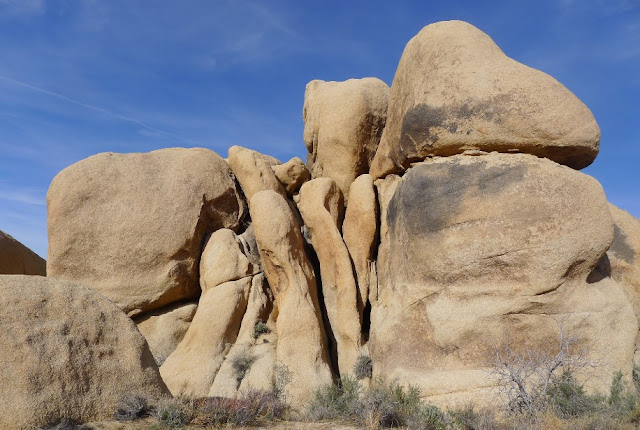 Planning on staying four days at J Tree we were up roaming the campground the next morning looking for a more sheltered and level spot.  When the rig pulled out of site # 10 we moved ours over there and tucked the tent trailer into the south face of the three story pile of rocks; a beautiful campsite.  Later that evening, right at dusk, we watched a pickup truck with a small R-Pod trailer circle around.  All the sites were full.  The driver, a single California woman, stopped and I had a talk with her.  She was tired of driving and didn’t really want to drive another hour south to the overflow camping on the southern border of the park.  I had an idea.  We both walked around to lucky 13 and 12 where each site now had one car and one tent.  We approached the two young women in #12. I made the suggestion that since each site could have a maximum of two vehicles, there was room for the California woman to park her rig there just for the night if they didn’t mind.  They immediately agreed and approached the single man at #13 and before we knew it, our California woman was backing her trailer into the sloped Lucky 13 spot.  She then got to spend the night sliding down her tilting bed.  All was quiet that night at Belle campground, except for the yips and yaps from the coyotes as they frolicked in the night. 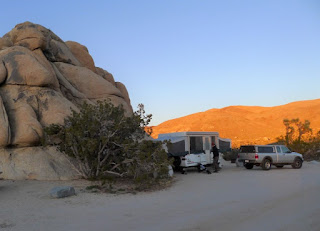 Early the next morning the California woman moved her rig and the two car campers left.  Then she pulled her rig into #12 and went to the pay station.   Later we saw that she’d payed and reserved both spots…. even though she was there by herself.  When we talked with her again later she said her friend was coming out to join her that evening or the next day.  “Oh, that’s why you are taking up two spots.”  She grinned like the cat that got the mouse.

That day we had a nice hike or two and all the time I had a little sadness in the back of my mind about how we helped that woman and now she was taking more than she needed.  I guess my thoughts finally filtered over to her camp because that night at 7:30 she stopped in on her way to drive to 29 Palms in the pickup truck to make a phone call.  “You know, I’ve thought about it and if you see someone who really needs a spot, feel free to let them know they can stay in #13. My friend isn’t going to make it tonight.”  All afternoon people had been driving around trying to find a site.  In the waning light I saw a white SUV circling.  I stepped out of our tent trailer and flagged them down.  At first the driver drove past me but then stopped and backed up. “Are you looking for a place?” I asked.  “Yes! We’ve been through every campground between here and Black Rock and there is nothing open.”

“I’ve got a place for you.” I said.  The young man driving smiled.  His girlfriend actually started to cry with happiness.   We got them settled into Lucky 13.  Later the California woman returned and met them.  I happened by and approached her and told her that I could see her Karma aura spreading up from her head.  She laughed. I laughed.

Let’s talk about Joshua Tree.  I want to write this down because we’ll be back and I’ll want to remember the lay of the land.  There are eight camping areas in the park. Four are reservation sites that can handle small and large vehicles.  The other four are first come, first served spaces and meant for smaller vehicles.  We could not get a reserved site online because they book up early.  Even trying a month ahead of time, we could not find a reservation spot for four days in a row.  On the south side of the park the Cottonwood campsite is reservable but, of couse, was full when we arrived except for single nights.  Just south of the park is a large area of BLM land that is designated as overflow camping.  We saw about thirty rigs parked there as we approached the park.

We drove 30 miles north through the center of the park on a smooth winding road to find the White Tank campground, a first come first served place.  The campground loop runs amid large boulders with little sites tucked into the rocks.  It’s a beautiful spot.  Length restrictions were at 25 feet so we were too long to stay there.  We saw lots of tents and four wheel drive vehicles.  Rock climbers like staying at White Tank.

Next up the road is Belle, also first come first served.  And the length limit is 35 feet so mid-sized vehicles fit.  That’s where we found Lucky 13. Like White Tank, Belle is an amazing place with the sites grouped around massive rock structures.  Fifteen miles up the road is the park boundary and the town of 29 Palms.  The park visitor center there has good wifi, cell phone coverage, and drinking water.  I found a young couple there with backpacks and gave them a ride into the park, saving them the entrance fee since they were with me and my senior access pass.  They got out of the truck and started backpacking into the hills for a few days of primitive camping.

Heading west from Bell, the first campground is Jumbo Rocks, a reservation site and it is chock full of RVs big and small, all crammed together in the scenic boulder field.  Clearly, this is the favorite campsite in the park for the big rigs that need to reserve a space ahead of time.  Jumbo Rocks is a busy place.

Further west is the first come first served camping area named Ryan.  It sits just below Ryan peak, a popular hike in the center of the park.  West of that is the last first come first served area of Hidden Valley where 44 sites sit among the rocks.  From there you can take a seven mile drive south to Key’s View at 5,185 feet  elevation where you have an amazing view a hundred miles to the south and west from Salton Sea to Palm desert.  When people arrive at the overlook, their cell phones start chirping as they pick up signals from the valley below.  Sadly, you can see the pollution pouring in from Los Angeles to the west.
The remaining two campgrounds that take reservations are on the northern border of the park at Black Rock and Indian Grove.   We stayed four days in Joshua Tree and enjoyed the scenery and the hiking.  We had no cell service and had to bring in all our own water.  We liked the smaller campgrounds because they were quieter.  People tenting don’t usually run generators
.
Our next time through our plan is to reserve ahead of time one night at one of the big sites.  Then we’ll break camp early and watch for people leaving the first come first served sites. That’s how you get a site there, we’ve learned.   And, who knows, a smile and a conversation can often get you squeezed in even when there is no room left in the house. 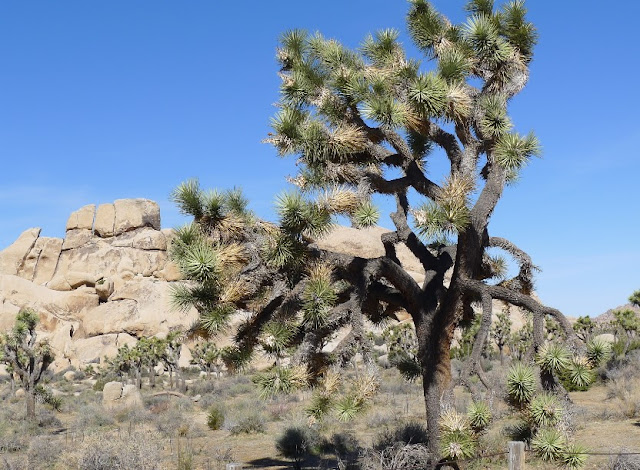