We are probably six days out of Hilo now. That means that I have 16 more three hour shifts to serve. We had the option to move from 3 hour shifts to 4 hour or more but chose not to do so, the reason being that if you have not slept well before your shift, a 3 hour shift is easier to get through than a longer one, and too many times because of wind and wave action we come onto shift not well rested. Did that make sense? 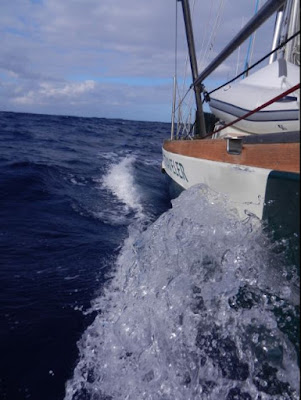 But anyhow, we've got the rhythm down and have settled into somewhat of a groove. There is a lot of tiptoeing around from 21:00 until noon so that whoever is trying to catch up on sleep can do so. But afternoons, we're all up and cooking, talking, reading, and trimming sails.

While standing in the head brushing my teeth I realize that my core muscles are much stronger as I'm just flexing my legs to stay upright, not holding on with one hand like I do in rougher seas. We have all lost weight. Now the challenge will be to continue with the core exercises and weight loss once we hit the land of milk and honey and pineapples.

Our solar generating has taken a hit as we head west under the big geniker sail. After 14:00 or so the sail blocks the solar panels. As it is warming a little bit each day, the refrigerator is running more often and the autopilot is constantly drawing power. And so, at 03:00 this morning I didn't begrudge dropping the sail and turning on the diesel. The ride gets smoother and the boat pushes through the waves instead of being bounced around by the waves. The alternator pushes some amps into the batteries. The drone of the engine, while in the past would keep me from sleeping, now helps me sleep because it is a constant sound, unlike the strange clanking and thumping the sails make on the lines when the wind is light and the sea is bouncy.

Looking ahead at the grib files we see a soft spot approaching where the wind could become too light to keep steerage on Traveler. By watching our diesel consumption, we know that we can afford to motor through the doldrums if we run into it. Sure, we'd like to sail the whole way from Cabo to Hilo but after spending some hours clanking around in light winds, its nice to have options. Next passage we'll be fully loaded with 120 gallons of diesel in the tanks and another 10 in jugs on deck.

Zing! went the reel. "Fish On!" It's an enormous Blue Marlin (400 pounds or more estimate)and she's running across our wake, flashing out of the water and shaking her big bill vigorously. She tacks round and crosses our wake again, skipping in and out of the water. What a beautiful animal! Then she roars off to the east, stripping line off the reel until Scott Tobiason pulls out the knife and cuts her loose. Landing such a large fish would take hours and then what would we do with it? We are hoping the hook rapidly rusts and the lure will drop to the ocean floor taking with it 100 yards of line.

Not a single vessel in sight or on AIS for at least a week. I take that back - we have seen some space junk at night. To the south we can see the Southern Cross, my first sighting, and each night we see Jupiter and Mars, escorting us to the land of hula and ukulele.