The Costalegre - Boats and the Beach 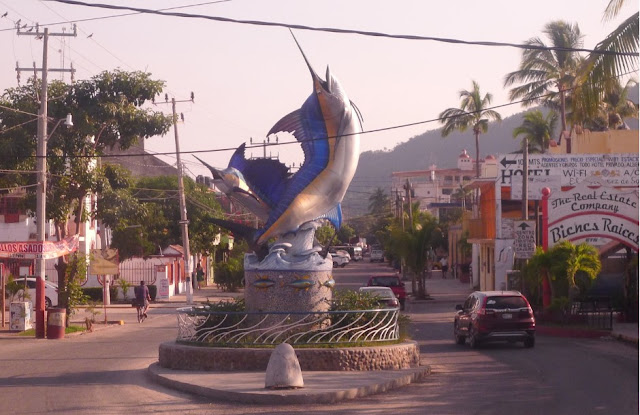 After arriving in Barra de Navidad, we can't wait to get on the boat!  After a quick breakfast snack in the hotel room at Cabo Blanco, we lugged everything downstairs, had the front desk call us a taxi , (500 pesos)and off we went, up and over the hills to the north to the beach town of La Manzanilla.  I sat on our big pile of luggage in the center of the little town while Connie went off to look for Robert and Virginia.  They had brought their sailboat, Harmony, (an Islander Freeport 41) over from the anchorage at Tenacatita, a place full of memories for us as we'd spent many weeks there over a four year period when we had Traveler in Mexico. 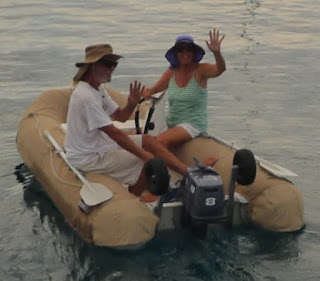 Connie spotted Harmony,  as Robert and Virginia were landing their dinghy, and helped them roll it up on the beach.  It was Friday, which is the day of the local outdoor market and a great day to shop for vegetables, which we did.  Our hosts are vegetarians (actually pescatarians) so we loaded up about ten bags of fruits, vegetables, tortillas, eggs, and wine and lugged it all down the street to the dinghy.  Being early in the day, the breakers were fairly mild.  With the food and all our luggage and musical instruments, there wasn't enough room in the dink for us all so Robert and I made a delivery trip out to the mother ship, then came back for Virginia and Connie.  We decided to stay ashore for a little while and treat ourselves to lunch on the beach at one of the Palapa restaurants.


After a relaxed meal we rolled the dinghy to the water.  Robert said, (as he always says when launching the dinghy) "Now when I say get in the dinghy, what are you gonna do?" And we all chimed in, "Get in!"  Connie at the starboard bow, Virginia at the port, Scott at the starboard stern quarter, Robert on the port, we got her afloat and started walking her out into the waves in about two feet of water.  "Wait for it. Not this one. Not this one. Pull up the bow to take this little one. This looks good. Let's go..... Connie, get in the boat. Virginia, get in the boat.  And with that the ladies jumped in, Robert and I gave it another push, then "Scott, get in the boat", we jumped in and Robert quickly started the motor and off we went, cresting the next wave with nary a drop of water on board.


We stowed things below on S/V Harmony, Robert went to the bow to start pulling up the anchor with the electric windlass, and Virginia took the helm, chasing the anchor chain this way and that.  Soon we were motoring across the big bay with Capt. Scott at the helm.  "You know where you are going, right?"  "Yes Sir."  Then I found myself doing what I've been wanting to do for about four years, piloting a boat across Tenacatita Bay! 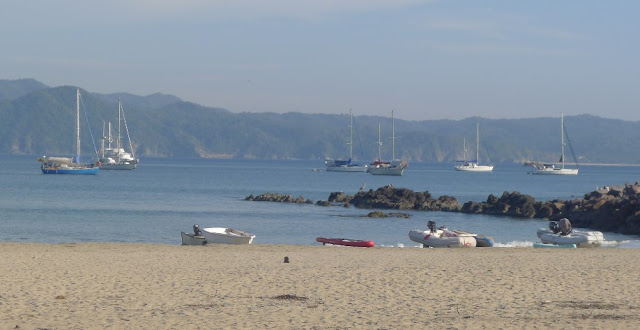 With the anchor down, amid about 25 other good sized sailboats (and two power boats) we got on our swimming suits and wow, my pale white belly was shocking to behold.  The air was 80 degrees, the water 80 degrees and so clear you could see the anchor sitting on the bottom on the sand.  We swam.   Then we all went ashore, the ladies swimming all the way and the men rowing slowly alongside to watch for fast running pangas who might not see swimmers in the water.  All around us people were getting into their dinghies and coming ashore.  It's the two oclock hour and time for swimming, bocce ball, a walk on the beach, followed by beers in the palapa restaurant, La Vena. 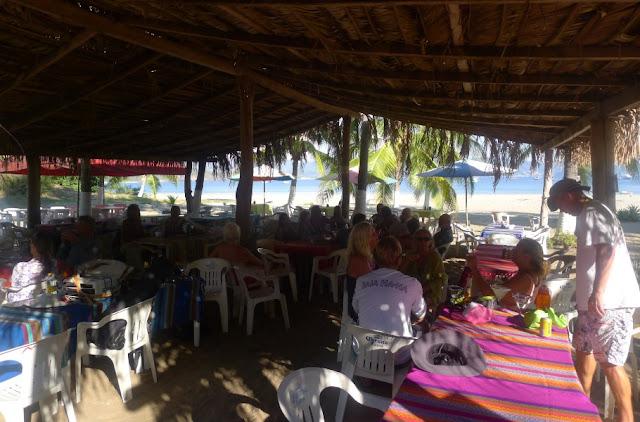 Coming into shallow water, we put down the dinghy wheels and circled, waiting for a big swell to appear.  When one came along, Robert accelerates just ahead of the curve as if trying to outrun the wave, then the swell lifts up the dinghy and we roar through the water to shore.  As soon as the wheels touch down and the crashing water starts to recede, we jump out, grab the bow of the dinghy and walk it ashore before the next wave comes tumbling down upon us.  It's an art form.


Like I said... bocce, walk, palapa, beers.  Later in the afternoon we do a beach departure in the building surf, getting a little soaked but no harm done, and head back to the mother ship.  Our first night was a special night being Friday night when the Mayor (as Robert is called) organizes a dinghy raft up.  Robert and Virginia take the dinghy over next to Good Dog beach and drop a little anchor.  Then other dinghies from the anchored fleet come over and raft up, all in an ever growing circle.  For this particular raft up, the topic was one that Connie thought up.  It was much like the topic we use at our winter Solstice group circles around the fire pit. " If you had the opportunity to welcome something new into your life, whether it be a character trait a physical thing or whatever, what would that be, and why?" 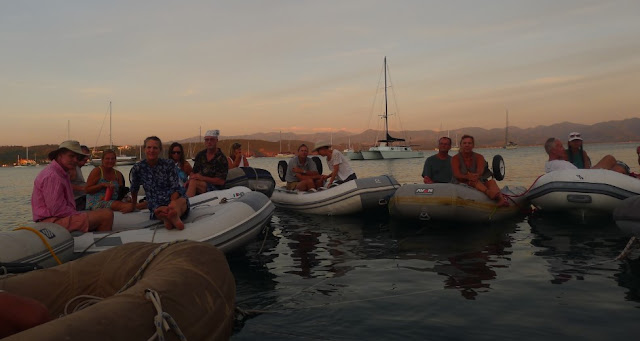 While passing around food we took turns, telling our names and the name of the boat, before revealing something personal or not too personal.  We were surprised to learn that multiple people expressed dissatisfaction with a son or daughter in law who was making their family life uncomfortable. The reason for this seems to be that older people in the cruising community miss their grandchildren and want them to come to Mexico and visit on the boat.  The in-law might be too cautious, afraid of the stories out there about crime in Mexico.   There were some funny comments and some serious ones, then Robert announced Connie and off she went with the ukulele with some songs of the sea.  The accordion made an appearance and so did the little coatimundis on shore. We all had a great time until the mosquitoes came out.  The the raft broke up and everyone zoomed home to their screened in cabins on gently rocking boats. 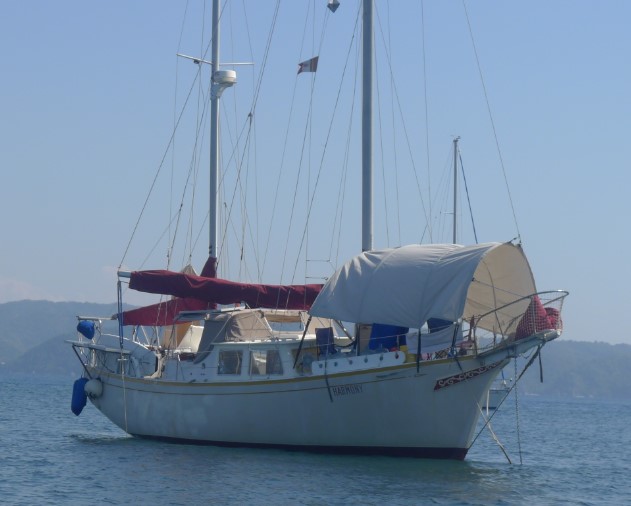 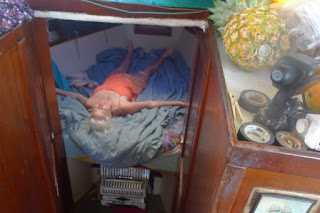 And so we spent five days aboard the sailing vessel Harmony, eating huge portions of fruits and vegetables, making guacamole, visiting the beach, snorkeling, paddle boarding and playing cards (Oh Shit) into the night.

One thing we came away with is that if we want to get back into boating in Mexico in the winter then we can certainly do so. As you know, if you set your mind on something and follow it through, it will happen. 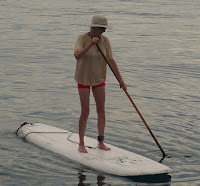 On day six, we brought our luggage through the surf to La Vena.  As everyone assembled on the beach for the bocce ball game, we said goodbye.  All these tanned retired couples shaking our hands and giving us hugs.  I looked at my white belly and noted that it was well on its way to a much darker shade.  We called a taxi and rattled down the cobblestones bound for our airbnb in La Manzanilla. We'll be back.