We're going offshore, heading west to the Hawaiian Islands.  Yesterday we provisioned the boat once again.  I say once again because we've been provisioning for the last week, off and on. But yesterday we made the almost final market run, filling two carts and then the trunk of the little taxi that carried us back to the marina.  We've got enough food for three people for 35 days.  That's good eating for 22 days and poor eating for another 15.  I guess if it came down to it we could eat for another week on rice and beans.  The crossing usually takes 20 to 25 days depending on wind, the length of the boat, and the skill of the crew.

Our friend Scott Tobiason joins us today.  With him and his passport we can go to the port captain on Monday and apply for our exit papers (zarpe).  The port captain will send our information over to customs and immigration who make sure we are not on the "most wanted" list.  Then customs makes an appointment for the next day to come visit the boat to make sure we aren't smuggling anything illegal. Once that is done we get our zarpe and can leave the country.

Coincidentally, the low pressure system that has been hovering over us the last few weeks gives way to a high pressure system on Wednesday that will give us a strong northerly flow down the Sea of Cortez.  This norther will then be on our beam as we leave Bandaras Bay and propel us for about three days before it is predicted to slacken.  In the old days they called a beam reach a "soldier's wind" because it is a fast point of sail, getting the soldiers to the battle quickly, but more importantly, a smooth point of sail as the boat heels but doesn't tend to pitch or roll too much.  Soldiers get seasick, you know.  Hopefully in these three days of the norther we can make about 350 miles and get far enough off shore to catch the trade winds that blow from east to west.  These trades can propel us swiftly to our destination.   That's the plan.  We hope for the best.

Our course is not straight across the 19 degree latitude line but takes the Great Circle Route, climbing to latitude 21 then turning south back to 19 degrees at Hawaii.  It is shorter by about 30 miles.  Figure that one out! 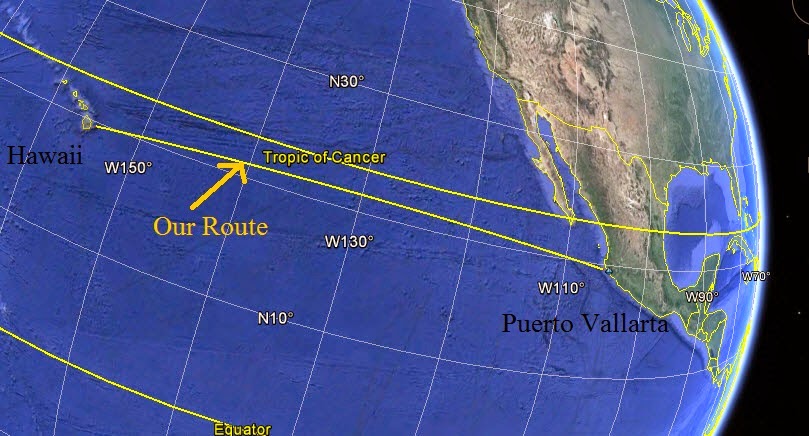 Once in Hawaii we'll visit the islands, find safe anchorages, and enjoy the sights.  After a couple of months when we get closer to the summer season, we'll head north from the islands the once clear of the Pacific high pressure zone, we'll turn east and run towards British Columbia, hopefully making landfall at the north end of Vancouver Island.  From there we'll go south at a leisurely pace and end up in Puget Sound to visit friends and see what it is like to have Traveler in our home waters.

At least that's the plan.  I hope it all goes down as we envision.  This is our first time running off shore.  I think we are up for it.  I know the boat is.

We don't have extra crew yet for the Hawaii to BC run so if any of our readers are interested in making a 20 to 25 day crossing in July please get in touch with us.  I think it will be much easier with a crew of three or four.  With two, we go four hours on and four hours off, thus you never get more than four hours sleep at a time.  With three we go four on, eight off.  That seems to be much better.  With four I guess we could go to three hour shifts and everyone would get nine hours between shifts.  What luxury that would  be!


On the way, we will be using the Sailmail and the Winlink system to send and receive email messages via the HAM radio.  We'll also use the radio to download weather files so we don't run smack into a tropical storm on the way.

The next postings after this one will be via the radio and thus will be brief and have no pictures.  Boring, in fact, it shall be, but exciting for us as we embark on our newest great adventure, crossing the Pacific Ocean.